Femoral hernias are not very common, nonetheless are very important to diagnose because they have a high risk of developing complications such as bowel obstruction or strangulation.

They can be misdiagnosed or missed on examination because they are found in an area where there are many other structures such as lymph glands.

The hernia develops and passes through a narrow passage or canal termed the femoral canal. This canal joins the pelvis to the groin. It is a quite short, tight canal and it is the tightness, which causes the high rates of complications.

They appear as a swelling or lump together with pain. The swelling may come and go (reducible) but are usually not able to be reduced (irreducible).

As the hernia enlarges, it may be pushed upwards and this can make it difficult to tell the difference between an inguinal hernia and a femoral hernia. Both hernias can be found together occasionally. Surgery is usually recommended for a femoral hernia because of the higher risk of complications.

In the non-emergency case it is usually a simple operation requiring only a small cut just below the groin.

The procedure can be carried out using Local Anaesthetic under light sedation. The hernia is reduced or removed and then the defect closed with suturing or a mesh plug fixed into position.

These higher approaches may be used more frequently when the hernia has developed complications such as obstruction or strangulation.

Can a femoral hernia be confused with other conditions?

The most common cause of enlargement of glands in the groin is termed “reactive”. That means a reaction to an infection or inflammation from a condition such as an infected toenail. The source of infection is not always obvious.

Other conditions, which may occur in this region, are infected cysts, or an abscess.

All these conditions can usually be differentiated from each other by the history and the examination, but often tests are required. Simple tests for differentiation are an ultrasound, which will certainly differentiate between a hernia and a lymph node. The ultrasound can even help diagnose which condition is affecting the lymph node.

Where lymph nodes are enlarged and are a cause of concern, a needle can be placed into the node under ultrasound control and tissue taken out for histological examination or culture if an infection is suspected. Two types of needles can be used – a very fine needle called needle aspiration cytology or thicker, true cut biopsy needles where a larger specimen is obtained and a more detailed analysis available.

As with any investigation, 100% reliability cannot be guaranteed. Thus, enlarged lymph nodes are sometimes removed surgically.

This series of photos is interesting in that the patient presented six years following a right inguinal hernia repair with a painful swelling and felt that his hernia had come back. However an ultrasound was carried out which suggested that he had a femoral hernia and not a recurrence. Clinical examination verified the femoral hernia.

The next question is usually, is it an inguinal or femoral hernia?  In this case it was felt to be a femoral hernia because these present usually below and lateral to the pubic tubercle. However confusion can arise because femoral hernias ride up over the abdominal wall as they expand due to the covering of the deep fascia (scarpas) and can appear to be higher. Thus, during the examination one should attempt to move it down as well.

The femoral hernia can be reducible or irreducible.

In this case it was an irreducible painful femoral hernia.

It is important in considering the diagnosis and operation to consider the anatomical landmarks.

Surgery can be performed with a variety of approaches. In this series one sees the low approach directly over the femoral canal.

Below are images of hernia surgical procedures. please don’t look if you are squeamish. 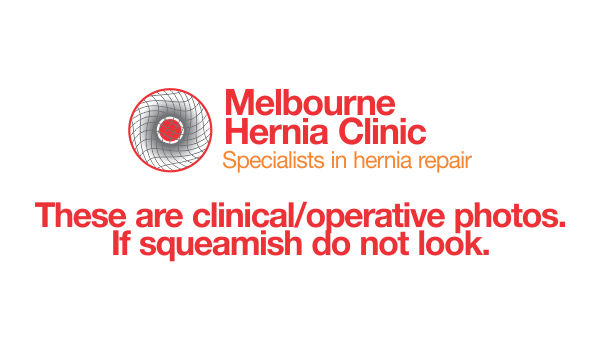 This shows a surface marking of a femoral hernia in a woman. Note that it is lower and lateral to where an inguinal hernia would come out.

This shows a femoral hernia being operated on and a mesh plug being inserted into the femoral ring.